Port Felix  is a quiet fishing village south of the Town of Canso. It is surrounded by islands such as Goat of Burying Island, Potato Island, Sheep Island, Hog Island, Tanner Island and Ebber Island.of Guysborough County.

I arrived early just before 6am. It was a cloudy morning and I was on my return to Colchester County via New Harbour, Country Harbour and the Saint Mary’s River north of Sherbrooke.

Up until 1869, Port Felix, Guysborough County, was originally known as Molasses Harbour. Early Acadian settlers named it because a keg of molasses washed up on shore. The early Acadian settlers arrived about 1797 from Chezzetcook, where they had been living since about 1758 after the fall of Louisbourg. Following the American Revolution, many Loyalists flocked to Nova Scotia, and the Acadian settlers were refused land grants in the Chezzetcook area, so many left that area, traveling down the eastern shore and settling in Molasses Harbour (Port Felix), Charlos Cove and Larry’s River. Port Felix is scenic, with its harbour and rugged coastline .

As you can see by my Photo, the Prevailing Wind is from the North East. 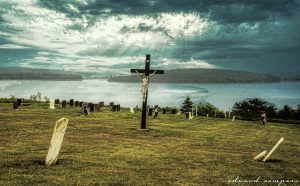 There are several small harbours between Canso and Country Harbour. Many of these communities have experienced the wealth of the sea and the potential of new jobs related to the offshore Oil and Gas industries.The Fishing  Industry has  certainly  seen  better  days.  The Promise of  Offshore  jobs was more  of a Promise  than a Reality. 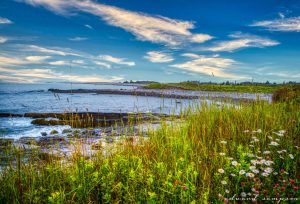 Post Views: 823
This entry was posted in Uncategorized. Bookmark the permalink.